I had originally planned to go to the DARC observatory on Saturday night. However, due to a dismal weather forecast, I was forced to rethink my plans. The forecast for Friday night was actually looking pretty good, and an opportunity came up to go to Willow Springs. I had never been up there before, so I jumped at the opportunity, packed my gear in a hurry, and headed down to Deep Sky Ranch.

While driving on Little Panoche Rd, something interesting caught my eye: a tarantula was slowly crossing the roadway. On the way back this morning, I pulled over to take this photograph: 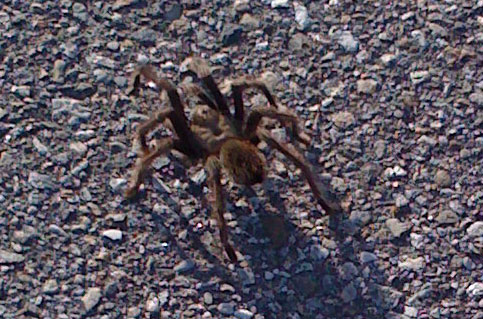 Willow Springs is a great place for deep sky visual observing. The sky is fairly dark, and the only really noticeable light dome, emanating from Hollister, is not much of a problem. Here is a summary of last night’s weather conditions: 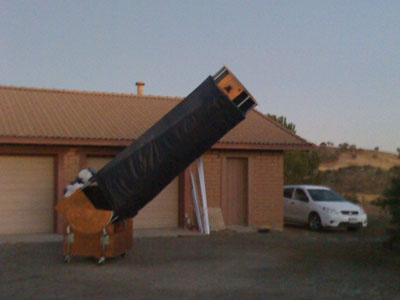 Since I am almost done with the Herschel 400 list, I had decided to start a new project: observing the galaxy groups featured in one of Alvin Huey’s free downloadable observing guides: Selected Small Galaxy Groups. These galaxy groups are fascinating because they are a real test of the observer’s visual acuity and equipment. Although the brightest members are usually immediately detected, these groups reward patient observers. The more time is spent at the eyepiece, the greater the number of galaxies that become visible! This way, I was able to detect a good number of members after spending about 30 minutes on a given group. I did not take detailed notes of my observations this time around, but I did write down the list of members I was positively able to detect. All observations were done using my Meade Lightbridge 12″ F/5 dobsonian telescope, and using mostly my 9mm Televue Nagler type 6.

Big thanks to Kevin Ritschel for hosting this star party and for sharing stunning views through DobZilla. Also, big thanks to Alvin Huey for putting together the observing guides and making them freely downloadable on his web site.